=Deals magic damage based on MAG ATK; deals 20 base damage per level

=Hits the first hero and afflicts a DOT effect

=Deals magic damage based on MAG ATK; deals 12 and 2 DOT base damage per level

Teleports to the center and unleashes powerful black magic upon them

= Hits all enemies in mid and back rows

= Increases Intelligence by 123; scales at +3 per level

Zeus spring or through Gem buying events. She was also given out on the 7th day of the Sign-In event in March. 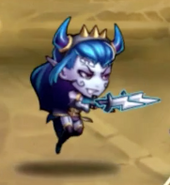 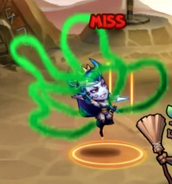 Add a photo to this gallery
Retrieved from "https://gods-rush.fandom.com/wiki/Medea?oldid=14760"
Community content is available under CC-BY-SA unless otherwise noted.